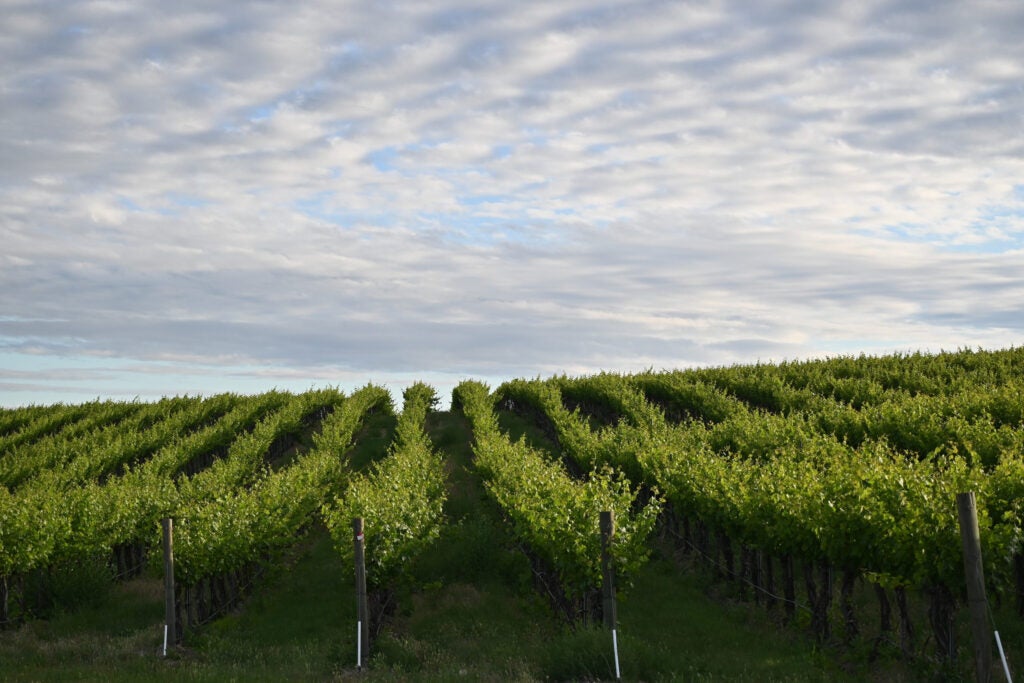 Just ten miles south of Pepper Bridge Winery on the edge of the Walla Walla Valley Appellation, you’ll find Seven Hills Vineyard. The original couple dozen acres of plantings date back to 1981. Now the vineyard boasts more than 235 acres of premium wine grapes. This premier vineyard is managed by Sadie Drury and is the source of fruit for many of the fine wineries in the state and valley. Wine & Spirits Magazine profiled it in its Fall 2004 issue as one of the ten great vineyards of the world.

The vineyard utilizes several trellising systems, including Vertical Shoot Positioning and Geneva Double Curtain, depending on varietal and vineyard location. With the Geneva Double Curtain system of trellising, dual cordon wires are extended four or more feet above the ground, and the vines drape over them like curtains. The Vertical Shoot Positioning trains a thin wall of leaves upwards from the grape clusters on the cordon.

The soils in this vineyard are predominantly Ellisforde Silt Loam, which is wind-blown glacial loess that is geologically very young and full of minerals.

During the first months of each growing season, water is pulled from the Hudson Bay Ditch for irrigation. After the ditch water is shut off to protect fish, water is pulled from a deep basalt well, which was created by drilling more than 1,100′ down through hard rock. The water is then distributed from a surge pond to the grapes through drip lines.

Grapes are one of the most efficient crops in terms of water requirements, and the drip irrigation system eliminates wasted water. A moisture-monitoring system data logs moisture and radios results back to the office to advise the vineyard manager of moisture in the root zone and any time moisture gets below the root zone of the grapes. This allows us to irrigate only as much water as will be taken up by the plants and eliminates contamination of the ground water system.